My goodness it's been so long since I came on here - for various reasons, the main being on my birthday my laptop took a nose dive off of my bed and broke the screen. I've been busy out my face with uni and haven't had the chance to even come online and keep up to date with blogs!

Had a fabulous birthday. My Mum and Dad got me a new beautiful camera which I can't yet work along with tickets to see Harry Potter Studio Tour! Liam and me heading down at the start of September (when the buzz from the Olympics has calmed down, though I'm sure the para-olympics will be on then!) for a couple of days and going to be complete tourists, photos to follow.

Been having a massive crafty craving. Started knitting and sewing along with getting out the cake decorating kits. Spending too many hours on Etsy when I should be studying. Luckily I have no money to spend in order to make this a bad habit ;)
I've missed so much agility due to the weather here in Scotland. It's rainy and making the fields flood which make for no good running dogs in. Hopefully it'll let up soon as we have some competitions coming up!
Posted by Amanda at 22:43 5 comments:

George's first show he only attempted one run and sadly he was eliminated due to refusing the soft tunnel. However the rest of the run was superb! Izzie had two 2nds and a 1st - amazing start to her second season, I couldn't have asked for more.

Even better news agility wise - last weekend our Club was entered an Interclub Competition. Our dogs were split into teams of 5 and we competed against each other and the other clubs in Scotland who entered. And amazingly? Izzie's team won! I could honestly have cried with happiness. We won a lovely rosette along with a a plague which will be engraved.
George's team wasn't placed but he ran so well in every run, he's going to be fab.
They both even done a 36 pole weave!

Unbelievably proud of both of my babies.


A bad sexy photo of some of our club 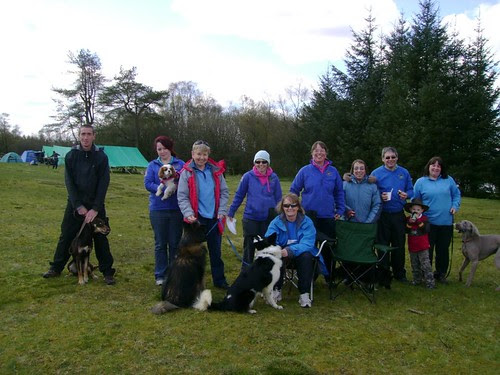 Our first agility show of what will be Izzie's 2nd season, and George's 1st season is this Saturday. I'm starting to feel the nerves again - but excited to start back.
George will be measured and we'll see how difficult the courses are before I run him. I've entered him in the jumping as his contacts made him nervous - but he's better at them now so hopefully going in the right direction.
I thought before this years season I would take a picture of Izzie and her rosettes from her first year. These aren't including her 6 trophies as well - very chuffed! Lets hope we have many more to come. 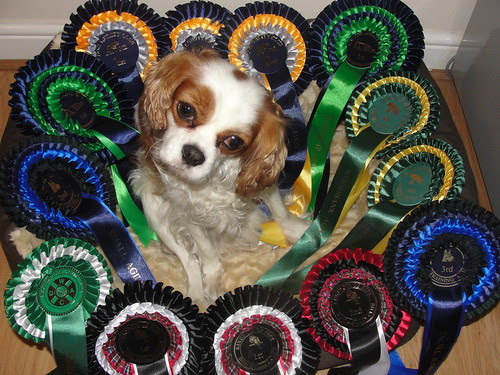 This isn't even everything I bought - just what I had to hand while taking the picture. 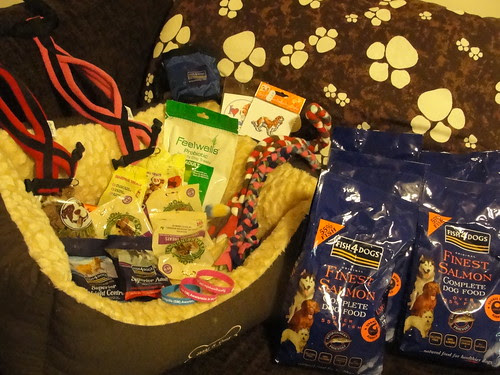 Not photographed I also got new ID tags for Izzie and George along with my Mum's dogs. They were £2 each engraved. I got my Mum a couple of presents for looking after my pair too and a few doggy magazines for myself. I'm sure there is more but thats all I can think of at the moment.
All in all I spent £115 on everything mentioned. Very reasonable! Of course we had to pay for our hotel and food too, but we get free tickets into Crufts so it was well worth the 6 hour drive - we'll no doubt be back again next year.
Posted by Amanda at 11:20 1 comment:

My car broke down around 8 hours before we were set to leave for Crufts. Many tears and half of our spending money later, we found a friend of a friend who could fix it at short notice and we were off.
We stayed from Thursday - Saturday and it was as usual a lovely weekend. We cheered on our Scottish friends competing, ate way too much and spent crazy amounts on our pups. We visited the Cavalier Matters stall on average 4 times stocking up on lovely SM Awareness bands (seen below) and I was way too shy to introduce myself (felt as if I was meeting famous people!).
We did watch a small part of the showing as I couldn't stay away from the Cavaliers for very long. Every one of them just looked beautiful. There was some contriversay as 6 of the 15 high risk breeds (Bulldog, Pekingese, Clumber Spaniel, Mastiff, Neopolitan Mastiff and Basset Hound) failed their Vet Check and subsequently weren't allowed to go on to the Group Judging. Well done to the Kennel Club I say for sticking to their guns on this, I hope it's the start of things to come and that eventually they don't discriminate only 15 breeds, but test them all. 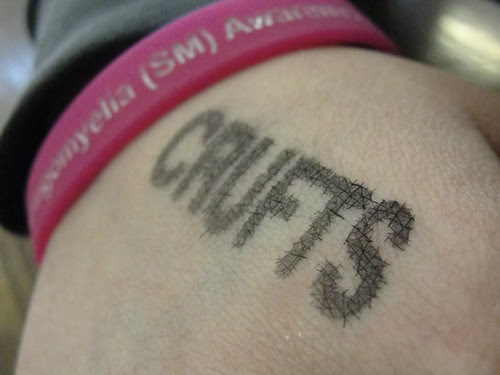 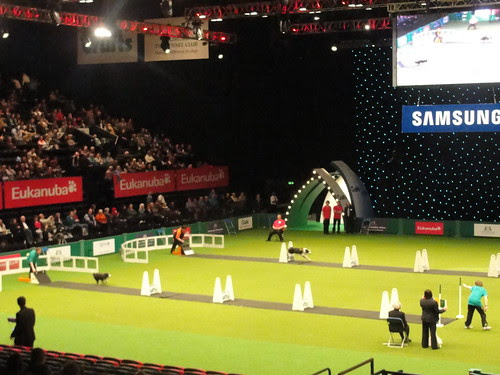 Trying to behave as I took way too many pictures and would be here all day posting. Will update with what I bought later too!
Posted by Amanda at 08:30 5 comments:

I'm just your average student and dog lover who likes to ramble about her Cavaliers constantly.
Follow at the top and leave a comment to make my day :) 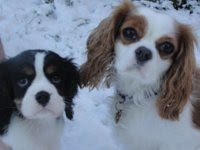